Brenijia Barnes lives at the Imperial Courts housing project in Watts, CA. As a 17 year-old high school senior, she can add grantee to her growing list of accomplishments. 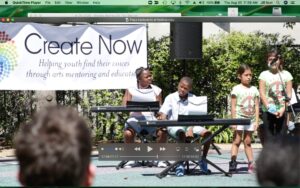 When Brenijia was 12, we began connecting her with arts programming and cultural events throughout Los Angeles, like we do with thousands of other needy youth every year. Brenijia thought when she took one of our keyboard workshops, “I’m never going to be able to do this, it’s too hard.”

When the workshop ended, she said, “It was a fun experience.” Brenijia then put her keyboard skills to the test by performing at our annual Power of the Arts Festival. She admitted being afraid because of how many people were there. While she received a wonderful prize, all that comes back to her now is the applause. This was one of the many firsts for Brenijia since her journey with Create Now began.

At one of our annual holiday parties, Brenijia, her sister and a friend got to sing and rap in our in-house music studio, design jewelry and decorations, and even meet Santa.

Over the past five years, Create Now exposed Brenijia to world-class cultural events. This young woman expressed that before Create Now, she didn’t know about the ballet. She really enjoyed the dancing and the story. Remembering Cirque du Soleil’s performance of Volta, Brenijia smiled and declared that “Even though I didn’t understand what they were singing, I understood the vibe, and it was cool.” 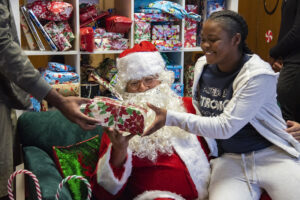 She remarked that “being introduced to [Create Now’s] programs changed me, and gave me more opportunities.” Self-described as a shy person, Brenijia eventually realized through Create Now’s programs and services (including mentorship), that she could be a role model in her own community.

Brenijia is no stranger to taking on leadership roles. She assumes parenting responsibilities in her single-parent home for her six younger siblings. She has developed so much confidence that now she leads other young girls at Imperial Courts. According to probation officer Kimberly McKinney who volunteers in the neighborhood, “They all act as if she is their mother.”

In June, ETF Portfolio Management offered Brenijia a $500 Investable Benchmark Grant. ETF provides this award annually to two young disadvantaged leaders. Brenijia felt “shocked, surprised and thankful” when she got the great news. Special thanks to Michelle Matich at the Global Unity Foundation for making this possible, and to Kimberly McKinney for immediately nominating Brenijia for this award.

As an Honor Student, Brenijia hopes to attend Spelman College in Atlanta where she plans to major in psychology and minor in business. After graduation, she wants to return to Los Angeles to run her own business – a center at Imperial Courts that will help young girls like herself who grew up with few opportunities or role models. She would love to mentor these youth (many are being sex-trafficked) and show them that “they can do something they like.”

For now, Brenijia misses going to school in person because of COVID-19, but she enjoys Create Now’s one-on-one hip hop classes through Zoom. We also introduced her to the editor of the NY Times Magazine, who selected Brenijia to be interviewed for an article on reopening schools. The editor stated, “The interview went great! Brenijia had tons of really interesting things to say.” This opportunity has not only bolstered her self-esteem, but will be included in her college applications.

We’re very proud of Brenijia’s growth, leadership and for the genuine and kind person that she is, and the most deserving candidate for this financial literacy grant. We look forward to seeing what her future holds!

CLICK HERE TO SEE A SHORT VIDEO of Brenijia.

CLICK HERE TO DONATE. Please give generously since every dollar impacts young lives.